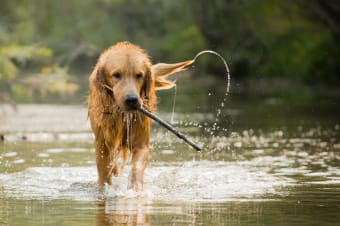 Giardia is a parasite that can afflict dogs, cats, and humans with the infection Giardiasis. In this post, our Los Angeles vets define Giardia, how it spreads, and how it is treated.

What is Giardia in dogs?

Giardiasis is an infection of the intestines that can occur in both people and animals. This infection is caused by the Giardia parasite, of which there are 8 different genotypes labeled A through H.

Types C and D most commonly infect dogs, while F is the most common culprit in cats. For humans, it's types A and B.

While Giardia in dogs does not always cause problems when issues do occur they are highly unpleasant. The most common symptom is diarrhea. Giardiasis is particularly dangerous for puppies, dogs with compromised immune systems, and senior dogs.

What are the symptoms of Giardia in dogs?

If your dog is showing concerning symptoms of illness, your best bet is to book an appointment with your vet, since many of the signs below are common to several conditions. that said, owners can be on the lookout for several symptoms of Giardia, including:

Diarrhea and weight loss often happen when the parasite disrupts a dog's internal systems, inhibiting its ability to absorb water, electrolytes, and nutrients. Diarrhea might be continual or intermittent, especially in puppies. If the disease is not diagnosed and treated, severe weight loss and even death can occur.

How are dogs infected with Giardia?

This single-celled parasite lives in the intestines of mammals, birds, and amphibians and as mentioned above, has different subspecies. While each subspecies targets a specific group of animals, all have the same lifecycle and method of transmission.

There are two stages of Giardia's lifecycle. Mature parasites (trophozoites) live in the small intestine, multiply and become cysts. Cysts are then infective and shed via feces from an infected animal. They can survive for weeks in the environment as cysts until being ingested by another animal. They then transform into trophozoites and repeat the lifecycle.

Dogs can contract Giardia by drinking water or eating grass or other substances that have been contaminated with feces. Any seasoned pet owners know our dogs explore the world using their mouths. This makes the parasite easy to pick up in an environment by doing anything from drinking from a puddle, eating another animal's poop, or chewing on a stick.

Even if they do not show signs of infection, our four-legged friends can spread the parasite. As you might expect, this is concerning, especially if you have more than one pet. While transmission between dogs and cats is unlikely, transmission between dogs is a serious concern. If one of your pets has Giardia, consult your veterinarian about the precautions you should take with your other pets.

Can I get Giardia from my dog licking me?

Fortunately, the risk of humans contracting Giardia from dogs is relatively low, but it can happen. Make sure to wash your hands after handling your dog's poop to reduce this low risk.

Giardia transmission in humans is most commonly transmitted through drinking water, not through pets. Giardiasis is also known as "Beaver Fever" in humans. If your water source is known to contain the parasite, consider purchasing a water filter, and avoid drinking contaminated water, especially while traveling. This parasite can be found in soil and on food, so wash all produce before eating and thoroughly wash your hands after working with dirt.

How is Giardia treated?

If you've noticed your dog is suffering from diarrhea or other symptoms, call your vet right away. Your vet will likely perform several diagnostic tests to find out whether your dog has Giardia. Depending on the results and the severity of your dog's case, a treatment plan tailored to your dog's needs can be developed.

What happens if giardia is left untreated in dogs?

Diarrhea can be continuous or intermittent, particularly in puppies. If you're wondering what happens if Giardia isn't treated in dogs, the answer is severe weight loss and, in extreme cases, death.

How can I prevent my dog from getting re-infected with Giardia, or making my other pets sick, during treatment?

As you've read here, Giardia is a highly unpleasant parasite that can't be prevented with the tick, flea, and heartworm preventatives your dog would regularly receive from a vet. However, there are steps you can take to prevent your dog from contracting Giardia. One of the most important items on the list is to ensure your dog has access to clean, fresh water at all times to cut the risk of them drinking from infected puddles (this will also contribute to your dog's overall health). If you need to, boil your dog's water (then let it cool before offering it to your dog) or purchase a filter that has been proven to remove Giardia cysts if you live in a place where Giardia is present.

Along with washing your hands after handling dog poop and quickly disposing of it, you should inform your vet if you have other animals in the house, even if they are not showing any symptoms. Your vet may want to start your other animals on medication as giardiasis is often asymptomatic and other pets could still be spreading the illness.

All household animals should be bathed regularly to remove cysts from the hair coat. You should also be sure to disinfect your pets' environment (crates, beds, etc.) and wash their water and food bowls daily.

Cleaning should take place at least a few days after all pets in the household have completed their medication.

Note: The advice provided in this post is intended for informational purposes and does not constitute medical advice regarding pets. For an accurate diagnosis of your pet's condition, please make an appointment with your vet.

Is your dog displaying signs of giardiasis? Contact Mohawk Alley Animal Hospital to schedule an appointment and ensure your dog is protected.

Looking for a vet in Los Angeles?

Our veterinarians are passionate about caring for Los Angeles companion animals. Get in touch today to request an appointment for your pet.